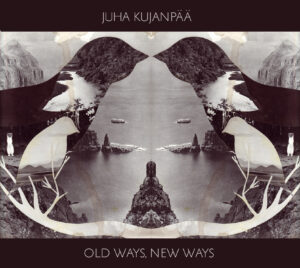 “Old Ways, New Ways” is the fourth instrumental album by Juha Kujanpää, a pianist and composer working in the area between world and jazz music. On the previous albums, the ensemble consisted of a combination of four-piece rock/jazz-band and three folk music fiddlers – now the line-up has changed. The core band (Juha Kujanpää keyboards, Timo Kämäräinen guitar, Tero Tuovinen bass and Jussi Miettola drums) has stayed the same, but there aren’t any fiddles to be heard this time. The sound of the album is characterised by wind and brass instruments, as well as a wordless vocal ensemble. Has the music changed – that’s left for the listener to decide.

The horn section consists of some of the best musicians in Finland – Verneri Pohjola (trumpet), Joakim Berghäll (saxophones), Henri Haapakoski (flute) ja Jouni Järvelä (clarinet). One of the instruments on the album is wordless human voice. All of the singers (Jouni Kannisto, Susanna Lukkarinen sekä Eeppi Ursin) are current or previous members of the vocal ensemble Club for Five. Also there are two folk musicians featuring in a couple of songs, Teija Niku (accordion) and Emmi Kujanpää (kantele).

Juha Kujanpää has composed music for theatre and his bands (for example Karuna and Ikiranka). For him, the solo albums have been an important forum for creating just that kind of music he would like to listen to himself. Melody has always been an important element for him, which can be heard also in the new compositions. Music consists of dreams and thoughts written down, the movement of travelling and stopping to observe the beauty of ones surroundings.