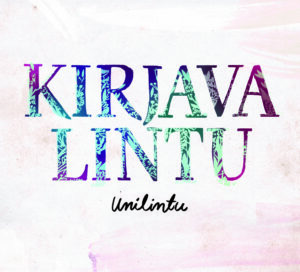 This is ”Unilintu”, an album by Kirjava lintu, a modern folk music group from Finland. The album was released on 16.04.2012 by Kuu Records. Unilintu is ”Dream Bird” in English, and the name of the group, Kirjava lintu, translates into ”Colorful Bird”.

Kirjava lintu is a group founded in 2004. It combines modern Nordic folk, songs and Finnish poetry in its music. Band’s first, self-titled album was released in 2007 and got excellent reviews. The new album ”Unilintu” consists of Juha Kujanpää’s and Minna-Liisa Tammela’s new compositions based on folk poetry and some new original poems. The band has been performing all around Finland. Most of its members also play in other well-known folk music groups, such as Tsuumi Sound System, Jouhiorkesteri, Nord String Quartet, Spontaani Vire, Suo and Karuna.

In the music of Kirjava lintu folk poetry and modern poetry are combined with the original, folk-influenced compositions and refined arrangements of Juha Kujanpää and Minsku Tammela. Among the tunes you’ll find a selection of cheerful, fast dance tunes and comforting ballads. The masterful “pelimanni”-violinism of Emilia Lajunen (violin and nyckelharpa) and Tommi Asplund (violin) is matched by the rhythmic playing of Hannu Risku (percussion), Ilkka Heinonen (bass) and Juha Kujanpää (piano and harmonium). Minna-Liisa Tammela’s voice has the strength and clarity for telling stories and fairy tales about the magic of winter, birds, origin of fire, the praise of love.

Kirjava lintu is dancing between the border of European culture and Nordic folk music. The poetry on Unilintu is based either on the Finnish Kalevala tradition or otherwise very much connected with nature. The compositions are diverse and fabulously beautiful.